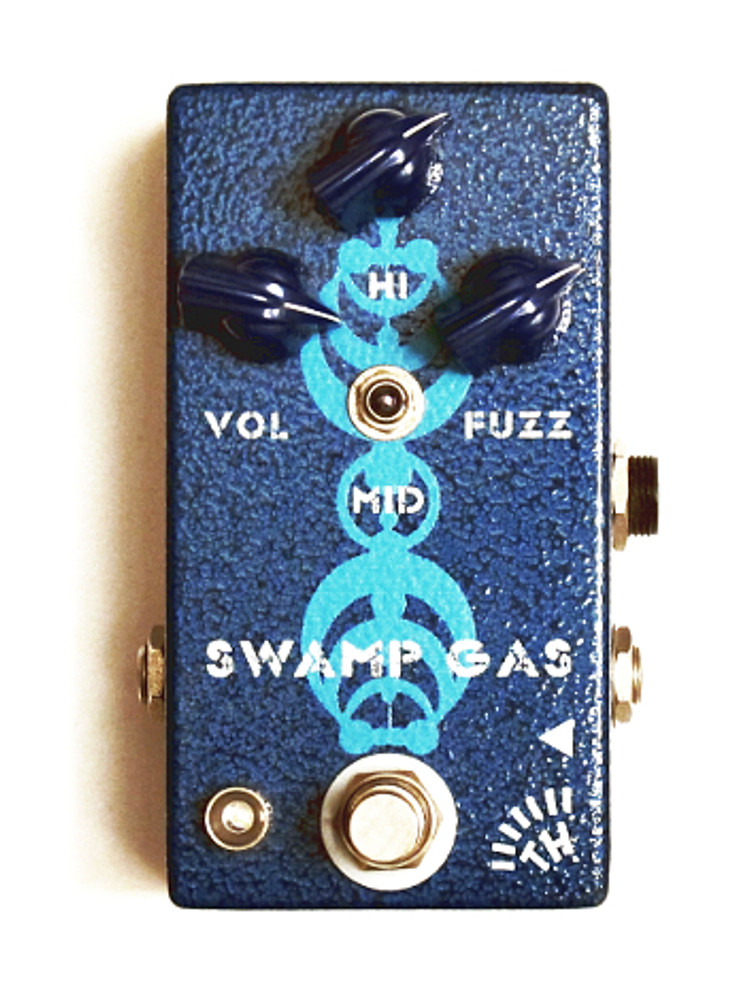 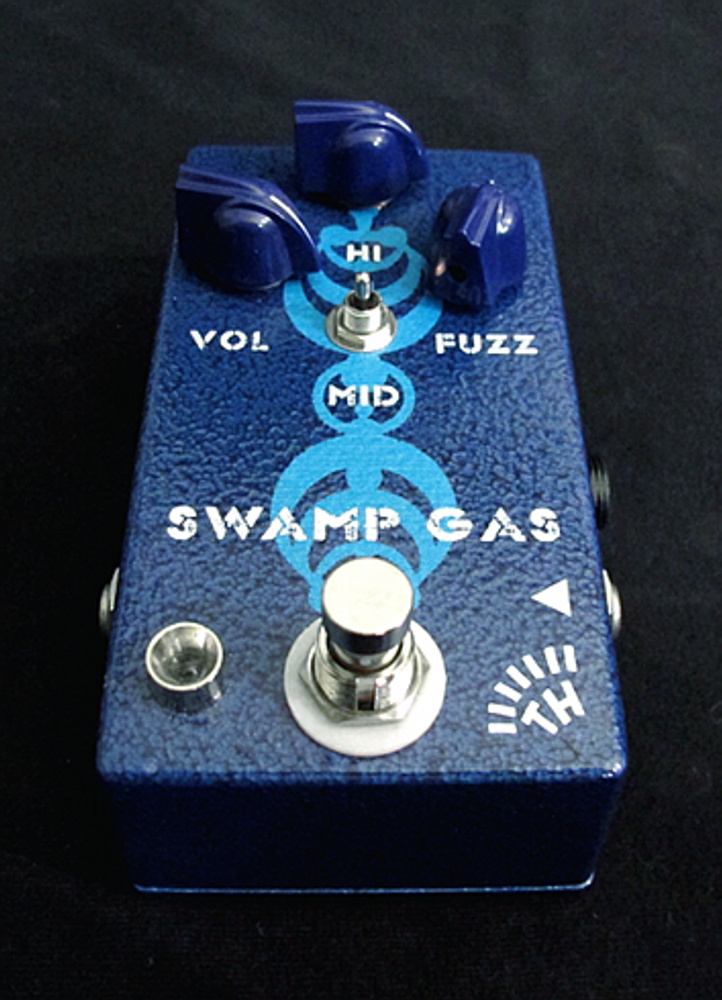 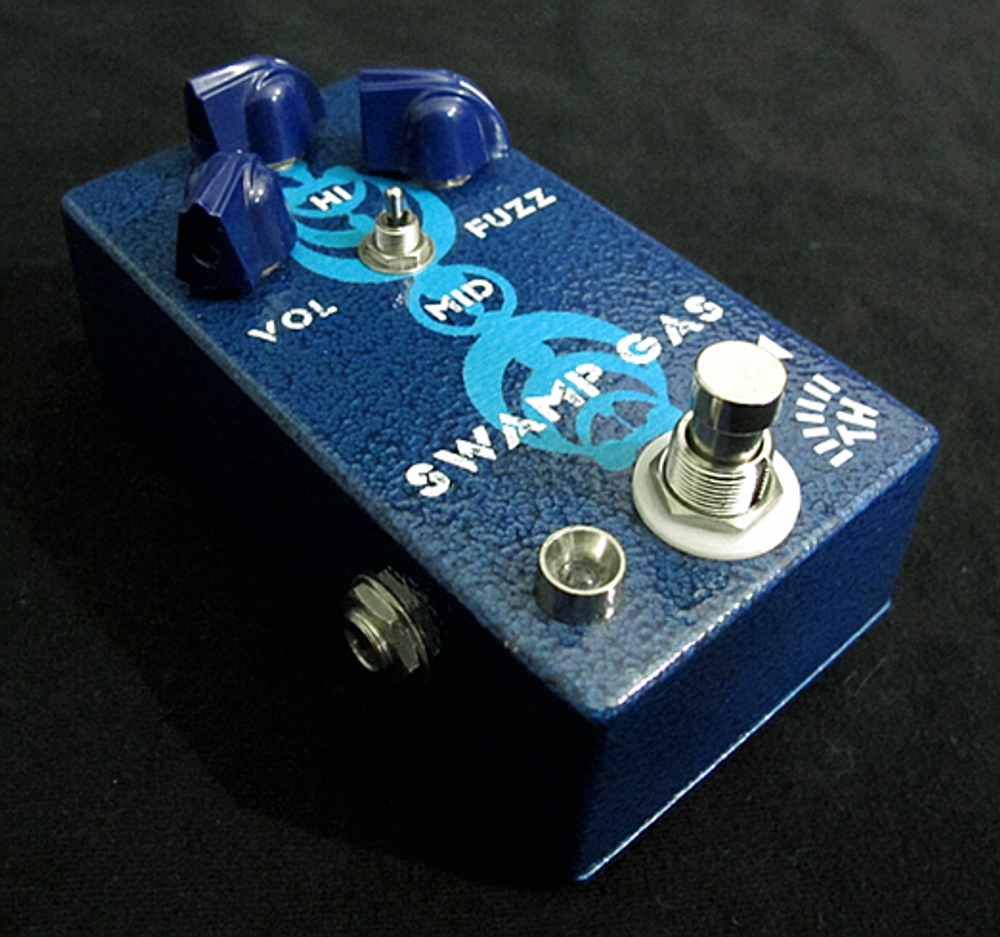 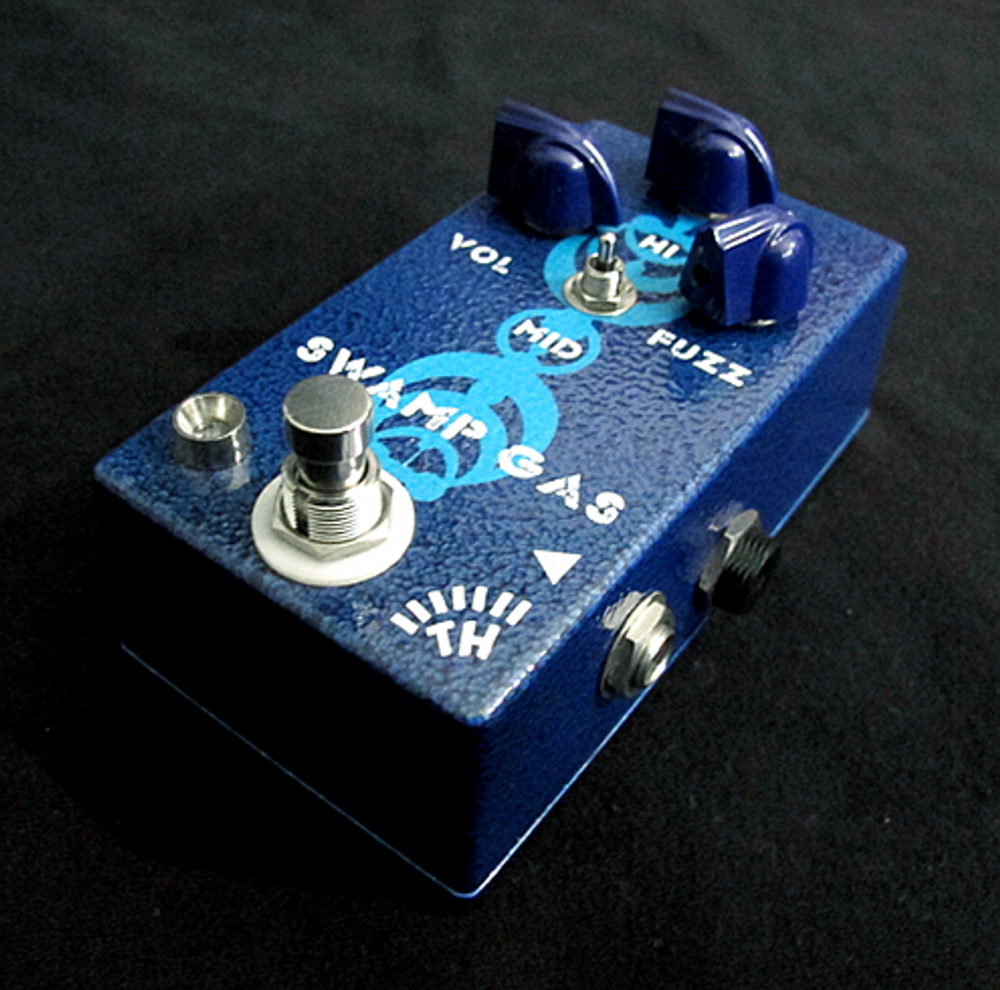 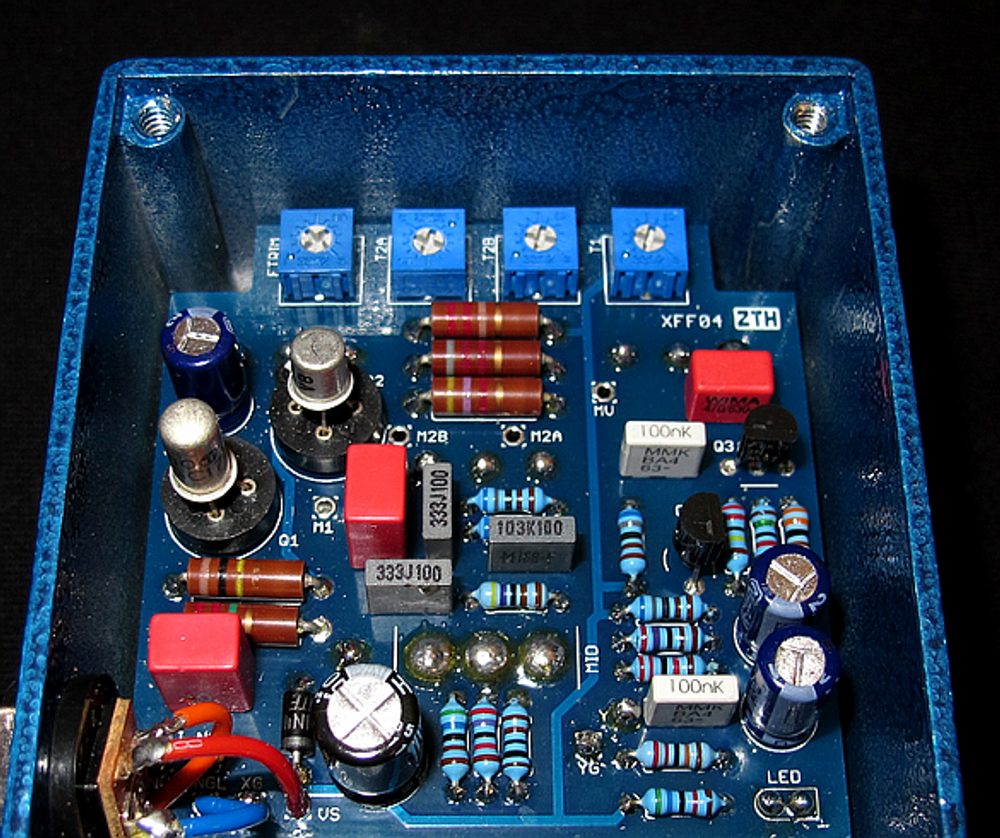 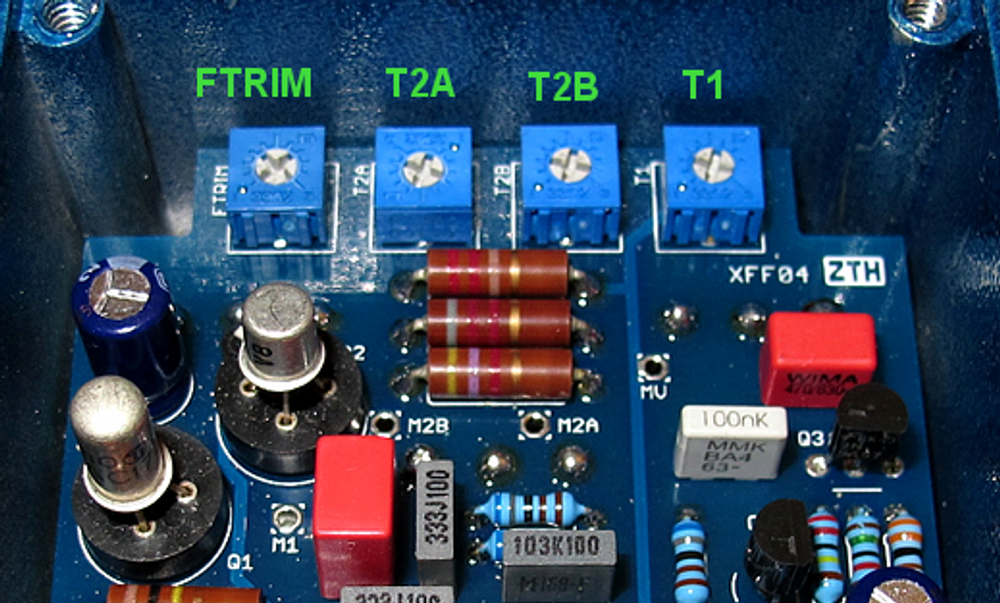 The Swamp Gas Fuzz is the latest fuzz offering from TH Audio. See the videos and the description below for more information.

As with the fuzz units that TH Audio has offered in the past, the fuzz-producing transistors in the Swamp Gas are socketed, not soldered in place. As of 2017, one of these transistors is Germanium (usually an AC176) and the other is Silicon (BC109C). Both of these transistors can be easily replaced, with a wide variety of Germanium and/or Silicon NPN transistors, which can be re-biased with the onboard trimpots. See below for more information about that.

Despite the sockets and trimpots and such, no initial setup is required - the Swamp Gas will arrive ready to plug in and play.

Fuzz Controls, you guessed it, the amount of fuzziness. All the way clockwise gets reasonably sick, at least with the "stock" transistors.

Hi Yes, hello to you too. Turning this knob counterclockwise will roll off extreme high frequencies.

Vol Controls, you guessed it, the output volume. Unlike older fuzz-face units, rolling this knob back doesn't cause major loss of high frequencies.

Mid This is a three position switch that a) doesn't scoop any midrange when in the middle position, b) scoops some midrange in the left position, or c) scoops a lot of midrange in the right position. Scooping the midrange usually gives the output a metallic or cold sound, which can be good or bad, depending on what you're looking for. When you use this knob in the right or left position, you'll notice a loss of signal strength, which can be addressed by twiddling, you guessed it, the volume knob.

Scroll down for information about internal tweak. There are three more videos at the bottom of this page.

'FF' means the transistors that produce the beloved square-wave fuzz signal. There are two other transistors in there (little black bug-looking things) but they're soldered in and you'd want to leave them alone obviously (they're JFETs that serve as part of a buffer for the output signal).

If you do swap out the FF transistors, keep in mind that Silicon transistors will sound different than Germanium transistors, and when Q1 and Q2 are both Silicons, the output will often be overly aggressive and noisy.

But a variety of small-signal Silicons and/or Germaniums should work. The Swamp Gas uses NPN transistors; PNP will not work.

What The Trimpots Do

If you look at the photo of the circuit board above, you'll see little blue cubes with white circles in them along the top of the board, labeled FTRIM, T2A, T2B, and T1A. Those are variable resistors called trimpots and they can be adjusted with a small screwdriver (standard or Phillips). If you're interested, here is a pretty good trimpot primer:

The four trimpots here help to bias - in other words, set up an operating environment for - whatever two transistors are mounted in the circular black sockets on the left side of the board.

For FTRIM, T1, T2A, and T2B, refer to the photo above of the circuit board.

If you're comfortable with terms like 'biasing' and 'transistor,' scroll down to the long form below. If you're not, here is the short form:

The Swamp Gas Fuzz ships ready to use, but you might want to try some Germaniums you got from people in former Soviet republics (like I do, often), or try two Silicons, or just mess around with the trimpots to see what happens. So:

And here is the long form.

FTRIM is a 1-kOhm trimpot for rolling back the gain of the Fuzz knob a little if need be. With high-gain Silicon transistors, you might hear a lot of noise and sizzle with the Fuzz and/or Feedback knobs turned way up. Turning this pot clockwise should throttle the gain a little and should help to suppress to some degree, at the price of some sustain.

T2A is a 1-kOhm trimpot whcih, along with a 220-Ohm series resistor, sets the resistance between the output signal and the supply voltage at the collector of Q2. Many Fuzz Face units use a 470-Ohm or 330-Ohm resistor at this point in the circuit. Turning this trimpot just a little bit clockwise adds to the fixed 220-Ohm resistance. Adjust to taste.

T2B is a 10kOhm trimpot which, in series with a 4.7kOhm resistor, sets the resistance between the collector of Q2 (the second transistor) and the audio output. Too far counterclockwise will give you a weak signal; too far clockwise will give you a very loud and very awful-sounding signal. This trimpot is useful for setting the signal-to-noise level of the audio output, but you'll hear tonal differences in there if you play around with it.

T1 is a 50-kOhm trimpot which, along with an 8.2-kOhm series resistor, sets the resistance between the collector of Q1 (the first transistor) and the voltage supply. Put simply: in many cases, you can set it by listening for when it's notgating, in other words, when you don't hear dead silence when a guitar is connected but not being played. Once you find a non-gating position, turn the pot back and forth and listen to either a drone note on the guitar or the background noise. You'll often hear variations in the highs and slight differences in the "squishiness" of the output. On other hand, if you like a gated sound, you can go for that too. Note: different transistors will 'gate' at different points, and you might find that some Silicons are uncooperative in the Q1 position.

Try not to touch the leads of the transistors with your fingers - the static charge in your body can do bad things to the transistor.

Disconnect any audio cables from the unit so that power to the circuit is shut off. It's probably a good idea to disconnect the battery too.

With pliers, slowly pull the mounted transistors out of the sockets. Don't pull too hard, and don't wiggle them too much - you don't want to strain the leads.

Whether you cut the legs of the transistors, and whether you bend them, is up to you. I always audition the transistors before I ship them with a unit, so, the legs will be bent more or less the way they should be mounted in the socket. Many, but not all, NPN transistors have a small tab on the housing somewhere that coincides with the position of the emitter leg. If the leg closest to this tab is the emitter, it can be lined up with the hole nearest to the tab on the sockets on the Swamp Gas circuit board. (which is where the emitter goes).